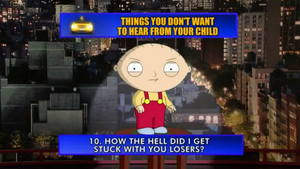 The Top Ten Things You Don't Want to Hear From Your Child was an edition of the Late Show Top Ten List on Late Show with David Letterman that aired Monday, December 21st, 2009 on CBS. Stewie Griffin presented the list. The segment has been a regular segment on David Letterman's late night programs, originating on Late Night on NBC. This was done as a promotional stunt for the DVD and Blu-ray disc release of Something, Something, Something, Dark Side.

And the #1 Thing You Don't Want to Hear From Your Child:

Retrieved from "https://familyguy.fandom.com/wiki/The_Top_Ten_Things_You_Don%27t_Want_to_Hear_From_Your_Child?oldid=215087"
Community content is available under CC-BY-SA unless otherwise noted.