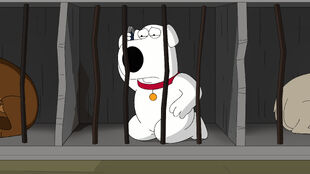 The Woof of Wall Street
Brian and Stewie take on the stock market. 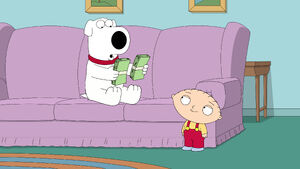 Brian discovers that Stewie has purchased every single grocery store horse ride in town through investments, but rejects his offer to help. But when he hits Consuela's car and finds himself in a money crunch, he takes him up on the offer in exchange for being taught 'gymkata,' a mix of gymnastics and martial arts and they soon find themselves incredibly wealthy. But when Brian decides to name a shady-looking investment in a company that makes protein shakes, they find the key ingredient is dogs. Brian insists on proceeding with the investment and Stewie leaves, but Brian soon finds himself on the menu as well but is saved at the last moment by Stewie and Rupert. 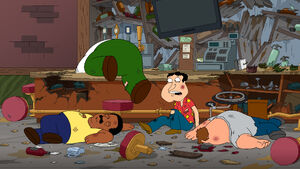 Meanwhile, Peter, Quagmire, Cleveland, and Joe plan on watching a UFC fight at the Drunken Clam, but agree to take over while Jerome is away when his mother has a stroke and he needs to go to Long Island. But when things get out of hand with a live bull, it destroys the Clam including Jerome's only portrait of his mother who passes away during his visit. The guys try to construct dummies of themselves for Jerome to beat up on his return, but Peter ends up inside the bar while his dummy is safe outside.

In the end, Brian tries to pin the experience on the evils of Wall Street, but Stewie points out that it was more of a reflection on himself for being ready to literally eat his own kind for money as puppet Peter comes in looking for Lois.

Previous Episode /// The Woof of Wall Street \\\ Next Episode

Retrieved from "https://familyguy.fandom.com/wiki/The_Woof_of_Wall_Street?oldid=213572"
Community content is available under CC-BY-SA unless otherwise noted.