Thelma Griffin was the mother of Peter Griffin, and the ex-wife of the late Francis Griffin. She took care of her son her whole life without much help from Francis, who was often verbally abusive to Peter. Thelma sometimes threw whiskey bottles at Peter when he had tooth aches. She attended many of Peter's parent-teacher conferences, as seen in "Death Lives". She is known for her frequent chain smoking usually going on gambling streaks in Las Vegas, as seen in "Holy Crap". At the end of the episode, she comes to visit her son as a place to rest from her gambling streak. The Griffins have a rocket powered escape pod installed in the side of their home for a quick escape when Thelma visits, which they used in the episode. She rarely visits Peter, if at all, which does not seem to concern Peter or Lois.

She attended Jasper and Ricardo's wedding in "You May Now Kiss the...Uh...Guy Who Receives".

She eventually left her husband in "Mother Tucker, saying she had needs he couldn't satisfy and hooked up with Tom Tucker, only to leave him too because she "needed someone to clear all the bats out of my plumbing", c. In this episode, it's revealed that she has a bladder control problem.

In "Peter's Two Dads" after Francis died it is revealed that Peter's true father is Mickey McFinnigan after a one night stand during a trip to Ireland.

In "Padre de Familia", Peter visits her asking for his birth certificate after implementing a company-wide employee history check. There, she reveals Peter was born in a Mexican abortion clinic, where after he was born, she fell in motherly love with him, and decided not to put him up for adoption. She never filled out the paperwork for her son, so that technically made him an illegal immigrant.

In "Grumpy Old Man", it is revealed that she was sent to a nursing home.

A portrait of Thelma can be seen on the dresser in Peter and Lois' bedroom, notably in "Family Guy Viewer Mail No. 2".

In the extended cut of "Amish Guy", Peter notes that Garfield: His 9 Lives frightened him so bad that he needed to sleep with his mother for a week.

Thelma dies of a stroke in "Mom's the Word". While delivering her eulogy at the Quahog Funeral Home, Peter follows her wish to be buried with her pet cat Mittens so he has it put down and placed in the casket with her. While sorting through her belongings at the Quahog Acres retirement village where she lived, Peter is introduced to her friend Evelyn. When Evelyn's feelings for her long-dead husband Walter cause her to make sexual advances at Peter, he takes solace at Thelma's grave at the Quahog Cemetery.

Young Peter follows her advice not to talk to strangers in "The Most Interesting Man in the World" and misses out on a giant haul of candy. When he ignores her advice the following time, he is molested.

After their mother passes, Peter's estranged sister Karen Griffin comes to spend Thanksgiving with the family instead in "Peter's Sister". Peter notes that his parents allowed Karen to bully him while they stood by. 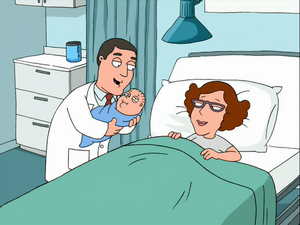 Retrieved from "https://familyguy.fandom.com/wiki/Thelma_Griffin?oldid=205086"
Community content is available under CC-BY-SA unless otherwise noted.