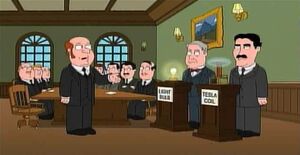 Thomas Alva Edison (February 11, 1847 – October 18, 1931) was an American inventor, scientist, and businessman who developed many devices that greatly influenced life around the world, including the phonograph, the motion picture camera, and a long-lasting, practical electric light bulb.

In "Brian Sings and Swings", after Brian and Stewie first sing with Frank Sinatra, Jr., Stewie claims that they will be the biggest thing since Edison harnessed electricity. This leads to a very anachronistic but humorous cutaway of Edison arguing with a jealous neighbor who still has candlelight. It is anachronistic because Edison mentions The Office and television, and blasts The Jimi Hendrix Experience's "Foxy Lady" on his stereo, things that would not be invented until many years later.

In "Brothers & Sisters" when Peter consoles Carol that she wasn't the first person to get a bum deal, Thomas Edison is told that his invention will power the world while Nikola Tesla's Tesla Coil will be used in the background of Frankenstein movies, leaving Edison disappointed.

In "The Big Bang Theory", Edison's wife finds him in bed with a black man where he claims to be "experimenting".

The Amish call Thomas Edison the "worst person who ever lived" during their prayer in "Amish Guy".

Edison takes credit for various inventions from their creators in "Underage Peter".

Retrieved from "https://familyguy.fandom.com/wiki/Thomas_Edison?oldid=185175"
Community content is available under CC-BY-SA unless otherwise noted.