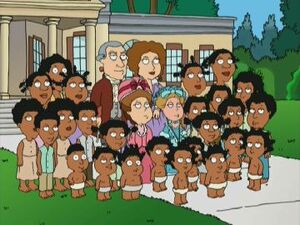 In "The Story on Page One", he decides to allow the children he fathered with his African American slaves into his family photo.

His face is also seen on Mount Rushmore in "North by North Quahog" and in "Baking Bad".

Jefferson tries to get congress to approve the Louisiana Purchase in "Stewie, Chris & Brian's Excellent Adventure".

Retrieved from "https://familyguy.fandom.com/wiki/Thomas_Jefferson?oldid=186812"
Community content is available under CC-BY-SA unless otherwise noted.