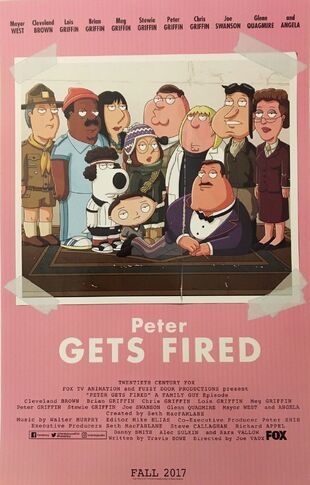 Three Directors
Peter gets fired from the brewery.

Plot: In a special anthology-style episode, Peter gets fired from his job at the brewery in the signature styles of three famous Hollywood film directors. 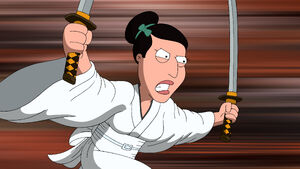 Mysterious tough guy Peter arrives at work and kills a co-worker over his lunch. He is fired by Angela for being late, but before being kicked out of the brewery, spies a glowing keg and takes it as payback. Arriving home after an intermission, he is gunned down, and nearly finished off by Angela who tells him that his entire family is dead. Awakening in the hospital, he stabs Dr. Hartman to escape and returns home to recover his special combat outfit and sword. Confronting Angela after being driven to the brewery by Cleveland, he first has to dispatch her horde of Tricia Takanawas before slicing her in half. Chopping off the top of the golden keg, he looks on in astonishment as the credits roll. 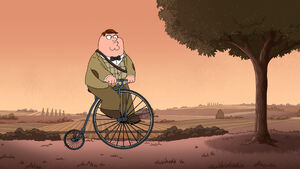 As narrated by Stewie shortly after turn of the century, Peter is fired just before the opening of his play, which was intended to be set in the brewery due to the access to supplies. Returning to his home, he informs Lois of the news and they recall the children from their various pursuits to share with them as well. They vow to help him put on his play by buying their own supplies which they perform outside of their lighthouse home. In an epilogue, Peter would die at age 43 from chasing a Pokémon across the street. 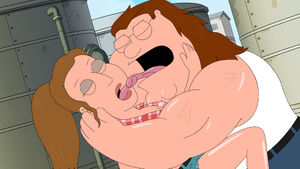 Muscular Peter single handedly loads a truck with precision tossing of kegs but is fired after destroying a keg for a drink. Meanwhile, Decepticon Transformers are setting out to destroy the New 7 Wonders of the World and only Peter's skill at heaving beer kegs can stop them. He is recruited by Carter following a conference at the White House and assembles a team of his old buddies who are working at the One World Trade Center. He stops to visit his ex-wife Lois who has replaced him with Brian. Saying goodbye to Chris and Stewie, who also hope he can save the wonders, his team is nearly ambushed by three Decepticons at Hagia Sophia, but after a quick cut montage of shots and explosions, Peter faces the final one. Heaving the keg toward the Decepticon, guys beg him to stop in vain as the explosion engulfs the pair. At a memorial service for Peter, a statue in his honor is unveiled and he appears, having been welded by together by his friends who kept his appearance a secret. Slipping off to make love to Lois behind a tombstone, or at least faking it due to impotence, he asks her which segment was her favorite and she confesses to not liking the episode.

Retrieved from "https://familyguy.fandom.com/wiki/Three_Directors?oldid=216299"
Community content is available under CC-BY-SA unless otherwise noted.