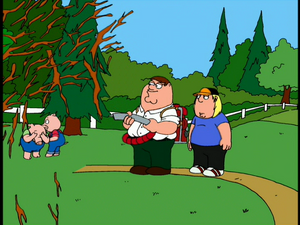 Three Little Pigs is a fairy tale featuring talking animals. Printed versions date back to the 1840s, but the story itself is thought to be much older. The story in its arguably best-known form appeared English Fairy Tales by Joseph Jacobs, first published in 1890 and crediting Halliwell as his source.

Peter Griffin tried to get the Three Little Pigs for his son Stewie's birthday in "Chitty Chitty Death Bang" but did not succeed.

In "Padre de Familia", Peter the Pig pleads with the Big Bad Wolf not to blow his house down so the area won't stink from the poop he just made.

Peter tries to have an intellectual discussion with Brian about the Three Little Pigs in "A Fistful of Meg".

The Big Bad Wolf tells his own story about a failed relationship with one of the pigs to Little Red Riding Hood in "Grimm Job".

Retrieved from "https://familyguy.fandom.com/wiki/Three_Little_Pigs?oldid=157853"
Community content is available under CC-BY-SA unless otherwise noted.