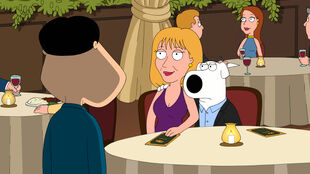 Tiegs for Two
Peter loses his favorite shirt while Brian and Quagmire compete for the affections of each other’s old flames. 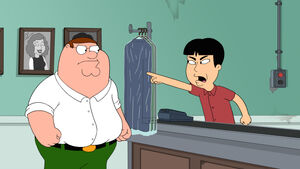 When the local dry cleaner loses Peter’s favorite white shirt, he goes ballistic. When Peter tries to order Lois to find a new cleaner she refuses and orders Peter to ask him over for dinner but Lois pushes things too far when she tries to make Peter apologize. Continuing to accuse the cleaner of stealing his shirt, Peter breaks into his house and finds a white shirt in his closet as the cleaner arrives with a gun. Holding up the shirt as evidence, Peter continues to insist it's his shirt until trying it on and discovering it is several sizes too small. The cleaner threatens to shoot Peter but Peter calls his bluff by not taking off the shirt. Not wanting to ruin his shirt, the cleaner agrees to fight Peter and beats him, resulting in his arrest.

While Brian waits to bail Peter out of jail, he meets Denise, a liberal who was arrested for protesting a Walmart opening. Brian tries to impress her but she is only casually interested and Brian breaks down completely when she refuses his request for a date. 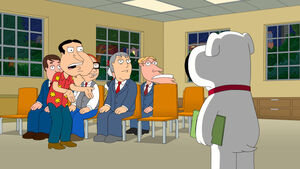 Following Peter's advice, Brian decides to enlist Quagmire’s help by taking his class on how to pick up girls. But when Quagmire's technique makes things even worse for Brian with Denise, Quagmire admits his style is only to get laid, not build a relationship. Brian takes Quagmire's style and manages to pick up Quagmire's lost love Cheryl Tiegs, forcing Quagmire to watch helplessly as Brian treats her like crap.

Out for dinner with Cheryl, things get nasty when Quagmire arrives with Jillian. Brian discovers that Quagmire took advantage of Jillian's lack of intelligence to pick her up and soon Brian and Quagmire start trading insults, resulting in both of the girls leaving them alone.

Outside the restaurant, Brian encounters Quagmire waiting for his car. Quagmire admits to only picking up Jillian to irritate Brian and Brian admits his feeling that he and Cheryl were likely not going to be a successful relationship either. When Brian thinks they've finally become friends again, he asks Quagmire for a ride home. Quagmire smiles in agreement, but when Brian reaches for the door, Quagmire races forward and then reverses, sending Brian flying after hitting him with the car.

Retrieved from "https://familyguy.fandom.com/wiki/Tiegs_for_Two?oldid=203534"
Community content is available under CC-BY-SA unless otherwise noted.