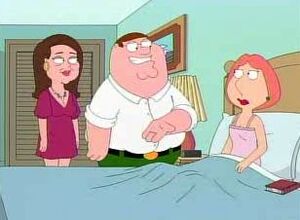 Tiffani Thiessen (born Tiffani-Amber Thiessen) is an American actress best known for her roles as Kelly Kapowski in Saved by the Bell and as Valerie Malone in Beverly Hills, 90210. She is also known for her role on Fastlane as Wilhelmina 'Billie' Chambers. As of 2009, she plays the role of Elizabeth Burke in White Collar. After many years of going by her full name, Tiffani-Amber Thiessen, she is now credited as simply Tiffani Thiessen.

She appears in "Big Man on Hippocampus" as a girl that Peter picks up to have sex with when he loses his memory. It is stated that she may be pregnant. At the time of initial airing, she was indeed pregnant in real life.

Tiffani is voiced by Adrianne Palicki.

Retrieved from "https://familyguy.fandom.com/wiki/Tiffani_Thiessen?oldid=179037"
Community content is available under CC-BY-SA unless otherwise noted.