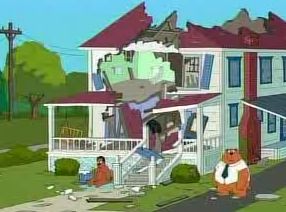 Tim is Cleveland Brown's new neighbor on The Cleveland Show who just happens to be a bear.

On Family Guy, he made a cameo appearance in "Spies Reminiscent of Us", stating he didn't understand the recurring gag of Cleveland taking baths during crazy shenanigans.

Tim portrays Wicket, one of the Ewoks in It's A Trap!.

Tim is voiced by Seth MacFarlane.

Quagmire comments of Seth's handing of the voice of Tim off to others in "He's Bla-ack!".

Tim, along with a slew of other characters from The Cleveland Show, appears outside of the Griffin Home as a potential candidate for replacing Peter on Quagmire's father-daughter camping trip in "No Giggity, No Doubt".

Retrieved from "https://familyguy.fandom.com/wiki/Tim?oldid=226125"
Community content is available under CC-BY-SA unless otherwise noted.