For the ship, see: RMS Titanic 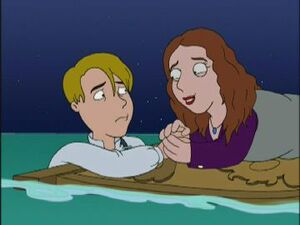 Titanic is a 1997 American epic romantic-disaster film directed, written, co-produced, and co-edited by James Cameron about the sinking of the RMS Titanic. It stars Leonardo DiCaprio as Jack Dawson and Kate Winslet as Rose DeWitt Bukater, two members of different social classes who fall in love aboard the ill-fated maiden voyage of the ship.

In "Death Is a Bitch", Jack is used as an example of what would happen if there was no death.

In "The King Is Dead", Peter quotes Jack Dawson's line "I'm the king of the world!" twice, resulting in him falling both times.

When Peter and Lois Griffin were on their cruise in "Stewie Kills Lois", Lois felt like "the British chick from Titanic", referring to Winslet. Peter corrects her, believing the role was played by Philip Seymour Hoffman.

Brian notes that he disliked Titanic in "Excellence in Broadcasting".

Brian's blind girlfriend Kate in "The Blind Side" tells him that her brain is trained to decipher the sounds she hears at the movies and tells how she loved Titanic. The cutaway shows a king sitting on top of the world surrounded by spaceships.

Two of Stewie & Brian's Children in "Stewie Is Enceinte" are named Jack and Rose, suggesting that they are named after the main characters of Titanic.

After becoming 'eccentric rich guys' in "The Woof of Wall Street", Brian and Stewie use a submersible to visit James Cameron on the Titanic with the intention of 'pantsing' him. However, their efforts tear him in half and he is eaten by sharks.

Al Gore narrates Titanic II in "Pawtucket Pete", in which the former iceberg has been rendered into a harmless ice cube by global warming.

Retrieved from "https://familyguy.fandom.com/wiki/Titanic?oldid=208954"
Community content is available under CC-BY-SA unless otherwise noted.