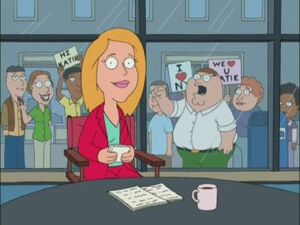 Today (also referred to as The Today Show) is an American morning news and talk show airing every morning on NBC. Debuting on January 14, 1952, it was the first of its genre on American television. The show is also the fourth-longest running American television series.

Then-co-host Katie Couric appeared in the movie Stewie Griffin: The Untold Story, and yelled at Peter Griffin for annoyingly and repeatedly calling her name while she was doing the show. Tom Cruise was going to appear later in the show that day.