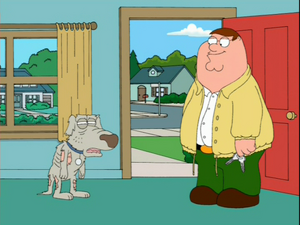 Todd Griffin was the original dog that the Griffins had before Brian. Todd died at the age of 15. The Griffins put him down due to family concerns about Todd's loss of bowel control. When his owner Peter Griffin took him to the veterinarian, he told Todd they were just going for a nice day at the park and Todd accepted the story.

Todd appeared in "Deep Throats" and was voiced by Mike Henry.

Retrieved from "https://familyguy.fandom.com/wiki/Todd_Griffin?oldid=159995"
Community content is available under CC-BY-SA unless otherwise noted.