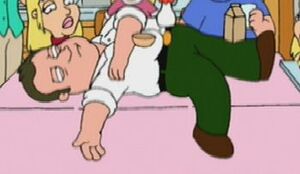 Thomas Duane "Tom" Arnold (born March 6, 1959) is an American actor and comedian. He has starred in many films, most notably True Lies (1994). He was the host of The Best Damn Sports Show Period for four years.

In "Fifteen Minutes of Shame", he is cast as Peter Griffin in the newly scripted show The Real Live Griffins.

Tom Arnold's sweat pants are hanging on the wall of heroes at Husbands Restaurant in "Dead Dog Walking".

He is voiced by Kevin Michael Richardson.

Retrieved from "https://familyguy.fandom.com/wiki/Tom_Arnold?oldid=213541"
Community content is available under CC-BY-SA unless otherwise noted.