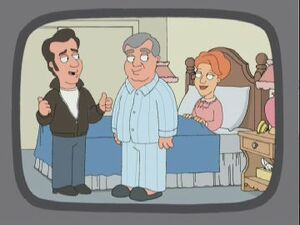 Thomas Edward "Tom" Bosley (October 1, 1927 - October 19, 2010), was an American actor, best known for his starring and supporting roles on the television shows Happy Days, Murder, She Wrote, and Father Dowling Mysteries, as well as the title role in the Pulitzer Prize-winning Fiorello!

Stewie Griffin thought he was riding the same train as Bosley in "Road to Europe".

He voiced himself in "The Father, the Son, and the Holy Fonz" in an episode of Happy Days. The episode shown inspires Peter Griffin to found The Church of the Fonz. The character appears in son Richard Cunningham's coming-out episode in "The Son Also Draws".

Retrieved from "https://familyguy.fandom.com/wiki/Tom_Bosley?oldid=112781"
Community content is available under CC-BY-SA unless otherwise noted.