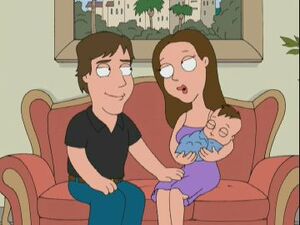 Thomas Cruise Mapother IV (born July 3, 1962), better known by his screen name of Tom Cruise, is an American film actor and producer. He has been nominated for three Academy Awards and won three Golden Globe Awards.

He was mentioned in "If I'm Dyin', I'm Lyin'". In "Ready, Willing, and Disabled", Stewie Griffin ponders if he is a teen idol.

Stewie Cruise is a parody of him, when his profession of love for Holmes is greater exaggerated as seen in "Deep Throats".

According to "Meet the Quagmires", he always runs in his movies allegedly to get away from his gay thoughts.

After having a sweet moment with then-wife Katie Holmes, she hits him with daughter Suri Cruise, runs free and then frees all of Tom's gay prisoners when Stewie shuts off the power in "Lois Kills Stewie".

In "Mr. and Mrs. Stewie", Stewie notes that he may have finally found a soul-mate in Penelope and wonders if this is how Tom Cruise's character Maverick felt when he met Goose in Top Gun. A cutaway replays a scene from the film, with Maverick pushing Tom Cruise's Scientology beliefs when Goose declines.

In "Fresh Heir", Chris watches the Mission Impossible V director's cut with the step-stools for Tom Cruise left in.

When Chris and Pam admit to each other that they are inexperienced at sex in "Baby Got Black", Chris considers that even Maverick from Top Gun must have been inexperienced once. A cutaway shows Tom Cruise as Maverick at a "glory hole" thanking the "pretty lady" on the other side and winking at the camera. 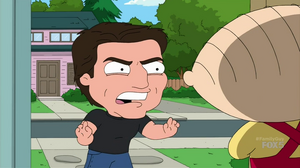 When Dr. Hartman tells Stewie that he’ll only grow to be 5’1” in "Papa Has A Rollin' Son", he hangs out with "Tiny" Tom Cruise to understand what it’s like to be short. But when he later finds out he will be normal, he tries to stop their relationship, angering Tom who starts stalking him. Stewie and Brian set a trap in a park, sealing Tom up in a cardboard box and sending him to Zappos, a clothing retailer, where the clerk notes he lasted two weeks before being sent back in.

Tiny Tom Cruise rescues Brian and Stewie when their house is fumigated in "Big Trouble in Little Quahog". He also gets trapped under George Townsend's helicopter in "Short Cuts" as he notes he was doing one of his own stunts by hanging onto the landing gear. When he extracts himself, he tries to get Stewie to take a personality test with him but is declined.

Retrieved from "https://familyguy.fandom.com/wiki/Tom_Cruise?oldid=219229"
Community content is available under CC-BY-SA unless otherwise noted.