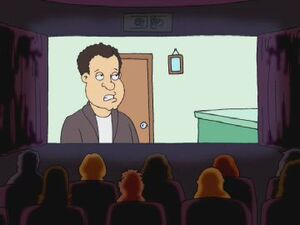 Hanks is seen in his role as Beckett in Philadelphia which Peter Griffin watches in the movie theater in "Death Has a Shadow". Peter can't figure out who he is at first.

He also appears in his Philadelphia role with E.T. in "Long John Peter". E.T. doesn't want to touch him in fear of getting AIDS.

At the Quahog Cinema in "Friends of Peter G", Peter plays movie trivia, incorrectly guessing Tom Hanks as "Tim Honks". When the answer is revealed, a non-animated headshot of Hanks is seen with it.

Stewie compares Tom Hanks' creation of Wilson in Cast Away to Peter creating a doll of Edna Garrett in "Bigfat".

In "Married...With Cancer", Jess, who has cancer, mentions liking most films by Tom Hanks except Terminal.

Retrieved from "https://familyguy.fandom.com/wiki/Tom_Hanks?oldid=210937"
Community content is available under CC-BY-SA unless otherwise noted.