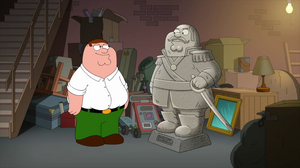 Thomas William "Tom" Hiddleston (born 9 February 1981) is an English actor. He trained at the Royal Academy of Dramatic Art (RADA), and he rose to prominence through a number of TV roles and more recently major film roles. He is best known for his performance as Loki in the Thor film franchise and in the film The Avengers.

Tom provides the voice of the statue of Peter's ancestor in "No Country Club for Old Men".

Retrieved from "https://familyguy.fandom.com/wiki/Tom_Hiddleston?oldid=214812"
Community content is available under CC-BY-SA unless otherwise noted.