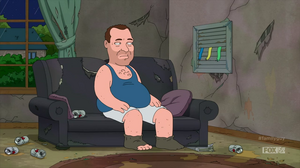 In a cutaway in "Once Bitten", Morgan Fairchild is shown to have a "fart hole" in her house, which sends farts from Hollywood stars to Tom Sizemore's house.

In "Peter's Def Jam", when Brian is forced to room with Stewie after Lois develops allergies, he brings along some of his possessions including Tom Sizemore's Game of Life, in which the players run into numerous bad decisions and poor luck.

Retrieved from "https://familyguy.fandom.com/wiki/Tom_Sizemore?oldid=203122"
Community content is available under CC-BY-SA unless otherwise noted.