Although he and Diane appear to have hated each other, during a news special when the cast believed that they were knocked off the air, Tom pulled out a sex-paddle to spank Diane. Right when he was about to deliver the first whack, the cameraman exclaimed that they were on the air. Tom also made many sexual jokes about her on the air.

His house is full of pictures of him, including one of him in a wedding dress. This could be because he hates his wife, Stacy, and is ashamed of his son Jake's face. But overall suggests he is merely a narcissist. This is more readily seen when he hangs a poster of himself over his bed, as well as asking if people want his autograph. 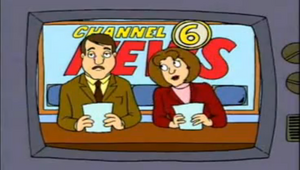 Seth MacFarlane only does a minor adjustment to his voice when speaking, as the character is very close to his natural voice.

Tom has an unhealthy obsession over Megan Fox and even has her phone number.

Retrieved from "https://familyguy.fandom.com/wiki/Tom_Tucker?oldid=185513"
Community content is available under CC-BY-SA unless otherwise noted.