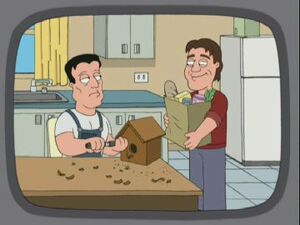 He is depicted on Peter Griffin's float in a parade in "Love Thy Trophy". The parade's theme was the second episode of Who's the Boss? when Danza's character Tony Micelli spotted Angela in the shower, "Briefless Encounter".

He plays Joe Swanson in Rolling Courage: The Joe Swanson Story, made and released in "Ready, Willing, and Disabled".

He starred in a movie with Sylvester Stallone in "Sibling Rivalry" where neither of them could be understood, called What?.

Fred Savage claimed Danza is one of his personas in "FOX-y Lady".

As revealed in "420", Carter Pewterschmidt believes that Danza sings "Ay oh whey oh, ay oh whey oh" in the lyrics to "Walk Like an Egyptian". Because he had to sell his Bangles records, he could not learn otherwise.

Peter distracts Italian shipyard workers by hold a sign and a limo for Tony Danza in "Boopa-Dee Bappa-Dee".

When Peter and Lois try to convince Chris to leave vocational school in "Stand By Meg", he dismisses the idea of needing real schooling, noting that Tony Danza never went to school and played a guy named 'Tony' on four different television shows.

Chris believes the Tony awards have something to do with Tony Danza in "Hefty Shades of Gray".

In a short film that Stewie makes for a kickstarter in "Start Me Up", he gives himself an Italian background and has trouble with his father. His father would later die when he hears that Tony Danza's afternoon television series is canceled.

Retrieved from "https://familyguy.fandom.com/wiki/Tony_Danza?oldid=221292"
Community content is available under CC-BY-SA unless otherwise noted.