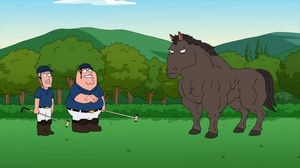 Topsy is a steroid-enhanced horse kept for guests at the Barrington Country Club. After Carter Pewterschmidt is kicked out of the club and replaced by Peter in "No Country Club for Old Men", he is given Topsy to ride for a game of Polo. Peter warns him not to use Topsy's trigger word which turns out to be "what." When Carter accidentally says it, Topsy starts stomping on him, Peter tries to get Carter to stop screaming as Topsy's parents were killed by screamers and suggests he submit to the horse. Carter starts unfastening his pants, and even though Peter tells him that he didn't mean that kind of "submit," proceeds to continue as Peter can't stop watching.

Retrieved from "https://familyguy.fandom.com/wiki/Topsy_the_Roid-Raged_Horse?oldid=144842"
Community content is available under CC-BY-SA unless otherwise noted.