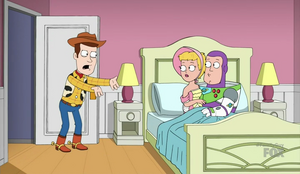 Toy Story is a CGI animated film series that began with the original 1995 film, Toy Story, produced by Pixar Animation Studios and released by Walt Disney Pictures. The plot centers around the idea that all toys, unknown to humans, are secretly alive, and the films focus on a diverse group of toys that feature a classic cowboy, Sheriff Woody, and modern spaceman, Buzz Lightyear.

For the outro of "Brian & Stewie", a musical number featuring the last known recording of Michael Jackson is about to be played, only for Brian to reveal that the number has been cut due to legal issues. Stewie reacts disappointedly as the footage contained a sneak peek of Toy Story 3.

Several plot elements of "Total Recall" are derived from the Toy Story series, including toys coming alive and a furnace scene reminiscent of the climax of Toy Story 3.

In "Chris Cross", Stewie tries to impress Brian with the works of Anne Murray by singing "You Needed Me" before an audience of his toys. After he succeeds in winning over Brian, he notes that all of the toys were impressed but Buzz Lightyear, who was absent. A cutaway gag shows Buzz in a bar picking up girls using his catchphrase.

Brian thinks Carter is his friend in "The Finer Strings", until Stewie points out that was what Woody thought about Buzz Lightyear, who is caught fooling around with Bo Peep.

While decluttering the house in "Throw It Away", Peter tries to catch his Buzz and Woody dolls moving but fails to do so when interrupted by Lois. Later, having stripped the house to a bare shell, she overlooks the dolls peering down from near the roof.

In the Helen of Troy segment of "Heart Burn", Trojan soldier Cleveland looks forward to setting down after the war to see Troy Story with his kids, a parody of the film.

Retrieved from "https://familyguy.fandom.com/wiki/Toy_Story?oldid=223469"
Community content is available under CC-BY-SA unless otherwise noted.