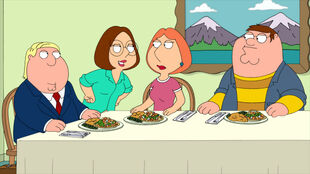 Trading Places
After the kids wreck Peter's bike, Chris, Meg, Peter and Lois all trade places to teach each other a lesson. 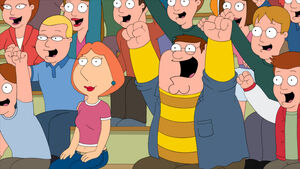 After Peter wins a dirt bike, Chris and Meg decide to take it out for a ride and accidentally destroy it. After getting chewed out, Meg suggests they simply buy another bike which sets off another argument about not appreciating the work that goes into taking care of the house. Lois suggests the kids and parents switch roles for a week to see just how tough each other has it which is eagerly agreed to by everyone. Chris successfully takes over Peter's job and Meg breezes though Lois' housework. Although Peter and Lois' first day goes well, they quickly succumb in their new role as high school outcasts. When Chris arrives home for the evening, Peter and Lois agree to throw in the towel and ask to return things to they way they should be. 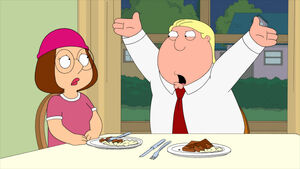 Meg is agreeable but Chris is unable as Peter was fired due to Chris being successful at the job and becomes the sole earner in the family. Despite Lois' objections that he needs to return to school, Chris points out that he likes his new adult role and refuses to give it up. Brian suggests letting him continue until Peter can land another job. Chris' success at the brewery leads to increased responsibilities and he takes up drinking to cope. After snapping at the family during their needs for money, Chris completely melts down and has a heart attack. When he recovers, Chris is finally willing to concede that adults have it just as tough as the kids and Lois admits that having a strong family helps. Peter tells of getting his old job back. Dr. Hartman finishes by asking what happens after the screen goes black at end of the episode.

Retrieved from "https://familyguy.fandom.com/wiki/Trading_Places?oldid=199428"
Community content is available under CC-BY-SA unless otherwise noted.