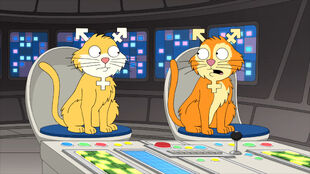 Trans-Fat
Peter is misidentified as transgender. 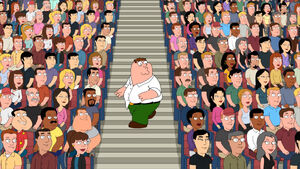 When Peter gets tickets to a Red Sox game for a funny video, he ends up having to use the transgender bathroom. Unfortunately, he is caught in the act on the Jumbotron and identified as transgender. But when he finds out that it comes with a few extra perks at work, he decides to play along. When he takes advantage of his life as a woman, he ends up knocking himself into a coma. While he is out, his bosses go ahead and have gender reassignment surgery performed on him.

Peter gets lessons from Lois and his boss Shelia about what it's like to live as a woman. but when his friends dump him, he has nowhere to turn to. He stumbles across Ida in a bar who is simultaneously critical and helpful. With her help, they start a fund drive that enables Peter to have his penis returned. The episode ends with everything returned back to normal and a few shots at the cast of Bob's Burgers.

Retrieved from "https://familyguy.fandom.com/wiki/Trans-Fat?oldid=219378"
Community content is available under CC-BY-SA unless otherwise noted.