[For a complete script, see: "Trump Guy" at the Transcripts Wiki] 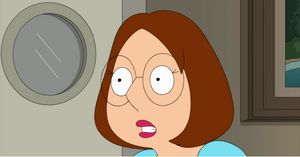 Stewie: Dad's working for the Trump White House?
[Cut to Stewie in his recording booth]
Director: Uh, hey Stewie? Could we do that again? Maybe a little more energy?
Stewie: [sips coffee] Uh, no?
Director: I ... I think we can use it.
Stewie: [sarcastic] Oh, hey. That's awesome.

Stewie: Dibs on the bedroom in which an intern got murdered!
Chris: Aw, I want the intern murder bedroom.
Peter: There's no need to fight, kids. An intern has been murdered in each of the bedrooms.

[The host of the White House party mistakes Meg for Chris Christie]
Stewie: That's like the fourth person, who's called Meg, Chris Christie.

Host: Later, we're all wiping our ass with the constitution.
[Cutaway to Brian in the writing room]
Brian: Hi, Brian Griffin. They let me write some of the liberal jokes. How you liking them? Good, there's more coming.

Meg: Is everything okay?
Ivanka: Huh? Oh, yeah. Sorry to be out of sorts. I just ... Sometimes I wish I could meet someone else, who's dad is a fat idiot, who once had a hit television show and who, overtime, has worn out his welcome.
Tiffany: You know, Meg's dad is also ...
Ivanka: Shut up, Tiffany.
Meg: Yeah, shut up, Tiffany.

Ivanka: Meg, I think you'd look amazing in my brand of lifestyle products, that are designed to represent a poor person's idea of what a rich person would wear.

Brian: Stewie, where have you been?
[Russian guy enters, dressed as Stewie]
Russian Guy: Oh, many American baby things, am I doing. So, what is your favorite ballistic missile launch codes?

Random Guy: With Geico, you can save up to 15% on car insurance.

Ivanka: I've gotta run, dad. Thanks again for getting me plastic surgery in my teens.

[Donald Trump grabs Meg by the pussy]
Meg: Oh my God!
Trump: Oh, please. Every president since Washington has done this.
[Pictures of the presidents are shown on the wall, with their voice overs, writing letters to their wives]
George Washington: Dearest Martha, I can not wait to once again, place my hands onto your Gates of Venus.
Harry Truman: My darling Bess, tonight, I'm going to drop the big one onto your Pacific Theater.
George H.W. Bush: Hey, Barbara Bush, working late, sleeping in office, crazy headache, you look like my mom.

Peter: You want me to just throw away in one day, what I've spent a whole day trying to build? A whole day's worth of work, poof! Gone in a day!

Lois: Meg, you expect us to believe that The President of The United States would grab a woman by her pussy? That's ridiculous!

Chris: Oh my God! Bob's Burgers is on! This show speaks to us young people, apparently!
Peter: That show, and ... and I mean no disrespect, when I say this, but that show looks like it was animated in a moving car.

Trump: When you walked through that door, you insulted Bob's Burgers and the hundreds of people, who work there.
Peter: Well, I was just kidding around.
Trump: No you weren't. You're just jealous, cuz it wins all the Emmys and the kids love it.
Peter: You seem to know a lot about Bob's Burgers.
Trump: Of course I do. Bob's Burgers is my favorite animated show.
Peter: [breaking the fourth wall] Wow. There's your headline, Emmy voters. Vote your conscience.

Stewie: [referring to Grover Cleveland] Well, he's not getting a musical.

Peter: We are done being mean and insulting, like Donald Trump is. From now on, this family's gonna be nice and supportive.
Meg: Oh, so, if we're being nice now, maybe you have nice things to say to me, dad.
[Peter's eye twitches and his nose bleeds, as he desperately tries to say something nice to Meg]
Peter: Um, ... of course I do ... Your hair is um ... very ... hat. You're a ... hat owner. You're also hatted.

Trump: You're not just a guy from Rhode Island, you're Peter Griffin from Family Guy. Many children have learned their favorite Jewish, black, and gay jokes, by watching your show over the years.
Peter: In ... In fairness, we've been trying to faze out the gay stuff.

Trump: Our Leslie Nielsen ratings are the highest in history.
Peter: Surely, you can't be serious.
Trump: I am serious, and don't call me Leslie.
Peter: Ugh, you really do find a way to screw everything up.

[Peter and Trump fight in the House of Representatives and every time one punches the other, a specific side of the room cheers for them. Cut to Chris Griffin, in the writers room.]
Chris: I wrote that one. Why are we so damn divided, America?

Trump: Peter! Grab my hand!
[Peter tries to grab his hand, but it's out of reach]
Peter: I can't! It's too little!

Brian: I'll tell you one thing. I'm not gonna miss Washington D.C.
Peter: Well, we had a lot of fun this week and changed zero minds.
Chris: If you wanna learn more about our president, consult the Steele dossier, which is all about getting peed on.
Stewie: He also, with whole heart, and full throat, endorsed a pedophile, for The United States senate. That didn't fit into tonight's narrative, but should not be forgotten.
Meg: And I am a proud hat owner.
Peter: Shut up, Meg.

[Peter and Trump fight]
Melania: Peter, catch! [Throws golf club] Kill him in front of me and I sex you!

Retrieved from "https://familyguy.fandom.com/wiki/Trump_Guy/Quotes?oldid=223724"
Community content is available under CC-BY-SA unless otherwise noted.