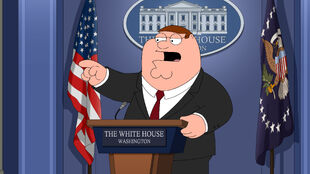 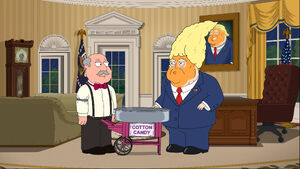 Previously on Family Guy - Peter accepts a job working as Donald Trump's press secretary after he becomes proficient at delivering 'fake news' and moves the family to Washington D.C.. Meg is less than pleased about the move, but after meeting Ivanka Trump and getting a makeover, she suddenly becomes attractive, at least by Washington D.C. standards. But when Ivanka leaves her with Donald, he grabs her privates, leaving her shocked and her family refuses to believe her when she tells them. 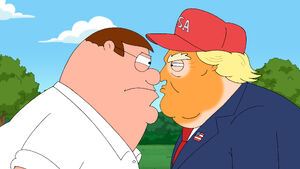 But when he tries to molest her a second time, they catch him in the act and Peter quits, and vows to be nicer. When he is unable to continue being nice, Donald rubs it in his face and insults him as a failed role model. When Peter questions his actual worth in cash, they start to fight throughout D.C.. Taking a pair of planes from the Smithsonian Air & Space museum, they crash into the Washington Monument. Donald tries to extend his hand to Peter, but it causes both of them to lose their grip and fall, landing on a stunt cushion emblazoned with the maple leaf as Canadian Prime Minister Justin Trudeau had managed to save the pair. The Griffins return home in time for Peter to see his appearance on Jeopardy!.

Retrieved from "https://familyguy.fandom.com/wiki/Trump_Guy?oldid=218496"
Community content is available under CC-BY-SA unless otherwise noted.