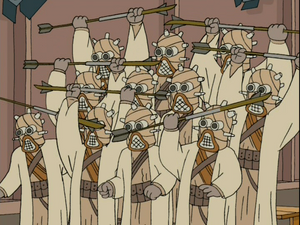 Tusken Raiders (or Sand People) are fictional creatures in the Star Wars universe. They live on the desert planet of Tatooine.

In "The Courtship of Stewie's Father", Peter Griffin conducts a choir composed of Tusken Raiders. They later run away, but Obi-Wan Kenobi warns Griffin they will return in greater numbers.

In Blue Harvest, they assume their roles in Star Wars Episode IV: A New Hope. Opie appears as a Tusken Raider that tries to attack Chris Griffin in the role of Luke Skywalker.

Retrieved from "https://familyguy.fandom.com/wiki/Tusken_Raiders?oldid=131156"
Community content is available under CC-BY-SA unless otherwise noted.