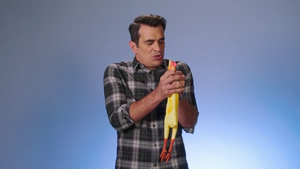 Tyler Gerald "Ty" Burrell (born August 22, 1967) is an American actor and comedian, known for his work in Black Hawk Down, Dawn of the Dead, Muppets Most Wanted and Modern Family.

His likeness appears with the cast of Modern Family in "The Simpsons Guy" which features a crossover between Modern Family and All in the Family.

In "Emmy-Winning Episode", he participates in a live-action chicken fight with a rubber chicken, and turns down an Emmy for the skit noting that he doesn't have room for it.

Retrieved from "https://familyguy.fandom.com/wiki/Ty_Burrell?oldid=198774"
Community content is available under CC-BY-SA unless otherwise noted.