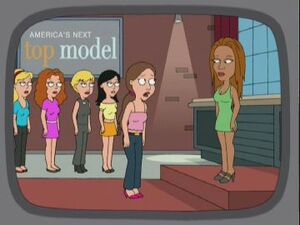 Tyra Lynne Banks (born December 4, 1973) is an American media personality, actress, occasional singer, former model and businesswoman. She first became famous as a model in Paris, Milan, London, Tokyo and New York, but television appearances were her commercial breakthrough. Banks is the creator and host of the UPN/The CW reality television show America’s Next Top Model and is co-creator of True Beauty. She also hosts her own talk show, The Tyra Banks Show which ran until May 28th 2010.

In "No Meals on Wheels", an enraged Banks produces a giant iguana out of her mouth, which devours a displeased Top Model contestant.

In Blue Harvest, a mouse droid reveals he was thinking about Banks, and implies that he masturbates to Banks pictures from her modeling years.

Retrieved from "https://familyguy.fandom.com/wiki/Tyra_Banks?oldid=209585"
Community content is available under CC-BY-SA unless otherwise noted.