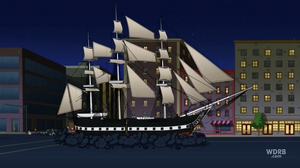 The U.S.S. Constitution is a wooden-hulled, three-masted heavy frigate of the United States Navy. Named by President George Washington after the Constitution of the United States of America, she is the world's oldest commissioned naval vessel afloat. She is berthed at Pier 1 of the former Charlestown Navy Yard, at one end of Boston's Freedom Trail.

During a drunken night on the town in "The Giggity Wife", Peter hijacks the U.S.S. Constitution and sails it through the streets of Boston past the cafe where his former fiancé works who is shocked that he has such a large ship.

Retrieved from "https://familyguy.fandom.com/wiki/U.S.S._Constitution?oldid=138203"
Community content is available under CC-BY-SA unless otherwise noted.