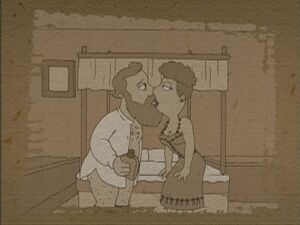 Ulysses S. Grant (born Hiram Ulysses Grant; April 27, 1822 – July 23, 1885) was the 18th President of the United States (1869–1877) as well as military commander during the Civil War and post-war Reconstruction periods. Under Grant's command, the Union Army defeated the Confederate military and ended the Confederate States of America.

He was seen in "Peter, Peter, Caviar Eater" as a patron of the Cherrywood whorehouse.

In "E. Peterbus Unum", Peter tells of his ancestor Ulysses S. Griffin, as being a great leader of the Union Army. Ulysses Griffin is then seen winning against the Confederate General Robert E. Lee in a drinking contest.

In "To Love and Die in Dixie", the residents of Bumblescum, Alabama stage a Civil War reenactment featuring his "defeat" by General Lee.

Peter declares victory over hijackers in "Passenger Fatty-Seven" as quicker than the treaty signing at Appomattox, leading to Lee agreeing to surrender but allowing the South to continue to be dicks forever.

Retrieved from "https://familyguy.fandom.com/wiki/Ulysses_S._Grant?oldid=191980"
Community content is available under CC-BY-SA unless otherwise noted.