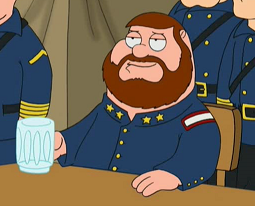 Ulysses S. Griffin was Peter Griffin's great-great-great-grandfather in "E. Peterbus Unum". He was the head General of the Union Army during the American Civil War. In a cutaway, he defeats Robert E. Lee in a beer drinking contest, thus ending the Civil War. They compromised that slavery would end nationwide, but the South still wouldn't have to read.

Retrieved from "https://familyguy.fandom.com/wiki/Ulysses_S._Griffin?oldid=221133"
Community content is available under CC-BY-SA unless otherwise noted.