[For a complete script, see: "Undergrounded" at the Transcripts Wiki]

Cleveland: You were in Seinfeld?
Joe: Yeah, that's right.

Chris: Hey, dad. What do you got there?
Peter: Chris, I got us lobsters for dinner.
Chris: Cool! Can...Can I kill them?
Peter: Hmmm, let me think...Of course you can kill them, sport!
Chris: YAAAAAY!

[A giant lobster shoves Peter's head into a boiling pot of water]
Chris: Stop! You're killing him!
Lobster: [sarcastic] No, that's just air escaping. They can't feel anything.

[Peter uses a flesh light]
Peter: I'm surprised this thing still works after the day we had...meaning I had sex with it.
Chris: I know!
Lois: We get it!
Meg: Ew!
Stewie: Five minutes ago, I had that flashlight under my chin to look scary.

[In Klingon]
Peter: Where'd you learn Klingon?
Lois: A couple of girls who do my nails are Klingons and I just had to know if they were talking about me.
Peter: Oh, word?

Lois: I found your account online. Monday night, you said you were working late but there's a $62 charge at the clam.
Peter: So, whoever stole my card is still in town.

Cleveland: Anyway, it was a beautiful ceremony. We laid my Uncle Reggie to rest with the respect that he deserved.
[Peter digs up through the ground]
Cleveland: AH! Uncle Reggie! I'm sorry we stuffed you in that Hefty Cinch Sack and pushed you in the pond!

Stewie: What is it? What is it boy?
Brian: [barks]
Stewie: The fat man dug a tunnel to go hang out with Cleveland, Joe, and Quagmire? We've gotta tell someone!
[Stewie goes to tell Lois]
Lois: What is it, Stewie?
Stewie: WHAAAAAA! WHAAAAA!
Lois: Daddy went to a Peter Cetera concert in Cleveland with Robin Tunney?
[Chris enters]
Chris: Robin Tunney from The Mentalist slept with the entire Cleveland Browns team?
Meg: Bad Moms 1 and 2 are available on most streaming platforms?
[Peter digs to the surface]
Peter: Don't ... Don't do that, Mila. Not on this show. 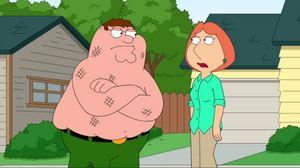 [Peter and Lois try to calm down after a fight]
Lois: Peter, I don't want to have to ground you. You're my husband and I just don't want you to lie to me.
Peter: I lie to you 'cause you treat me like a kid.
Lois: Act like a man and I'll stop treating you like a kid.
Peter: Look like a kid, I'll start acting like a man.
Lois: What?

Chris: I'm about to take my laptop into the bathroom. I ask that you please respect my privacy in this difficult time. Thank you.

Cleveland: So if we're all gonna die anyway, what's the worst thing you guys have ever done?
Peter: Okay, I'll go first. Lois once killed a woman.
Quagmire: Seems like a secret about Lois.
Peter: Yeah but I picked out the woman.

Quagmire What's that sound?
Peter: Probably just the movie in the next theater.

[20 years ago, Peter and Lois go on a date for their honeymoon]
Waitress: I'm sorry, sir. The chef said he can't make a chocolate chip gumball pizza.
Peter: Oh-ho. That's okay. It's not your fault. I'll just need another minute then.
[The waitress leaves]
Peter: [grimly] Her.
[Lois pulls out a gun]
Lois: I'm on it. I love you so much.

Retrieved from "https://familyguy.fandom.com/wiki/Undergrounded/Quotes?oldid=223320"
Community content is available under CC-BY-SA unless otherwise noted.