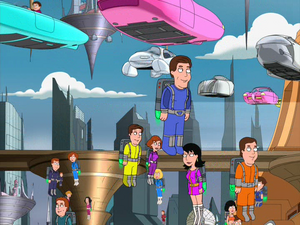 The Universe Without Christianity was the first universe that Brian and Stewie Griffin visited in "Road to the Multiverse". The universe was depicted as being futuristic, due to the dark ages never occurring and as such, allowing science and technology to thrive. As such floating vehicles, miracle pills, and instant bathrooms, among others, have been invented.

It was here that Stewie got his pig that he won first prize at a carnival with. According to Stewie, the woman here are drop-dead gorgeous.

It is also indicted that HIV/AIDs is a curable disease in this Universe after taking a simple pill.

Due to Christianity never inspiring Michelangelo, the art in the Sistine Chapel was created by John Hinckley, Jr., and is littered with pictures of Jodie Foster.

Retrieved from "https://familyguy.fandom.com/wiki/Universe_Without_Christianity?oldid=146131"
Community content is available under CC-BY-SA unless otherwise noted.