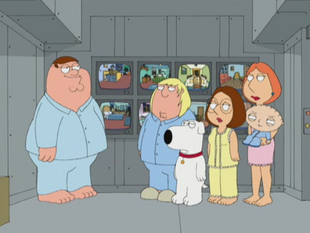 Untitled Griffin Family History
While trapped in a panic room, Peter tells tales of his ancestors. 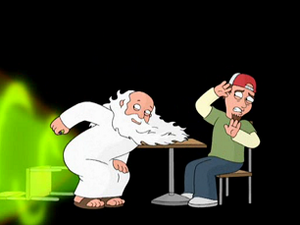 Lois is trying to get Peter to brush his teeth when they hear a noise coming from downstairs. Peter looks downstairs and find three robbers in balaclavas. The whole family wakes up and Meg startles Peter, and in a delayed response, he hits her in the head with the baseball bat he was carrying. The whole family then flee to Peter’s panic room. It is a small steel room with boxes and TV monitors that can be used to watch every room in the house. Unfortunately, the room has no phone, so Peter decides to tell stories about the Griffin family history.

These stories begin with the big bang, which was actually God farting through a lit lighter. Next is the Paleolithic Age. Ur-Peter invented the wheel, and then moved forward to the Bronze Age when Moses Griffin led the Israelites to freedom. 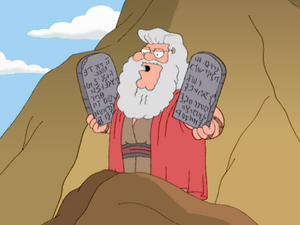 Peter also tells the story of black slave Nate Griffin, as he pranked the captain of a slave ship by cutting the floor off around the Captain’s bed and floating it out in the Ocean so that he woke up, got out of bed and fell into the water. Nate then went on become a slave to the Pewterschmidt family and got married to Lois’ ancestor. Other stories include that of silent movie actor Black Eye Griffin, and Adolf Hitler’s annoying brother Peter Hitler. Unfortunately, after telling the story of Nate Griffin, Peter accidentally activates the fire sprinklers with a flare gun, threatening to drown the family. While the sprinklers are going off and filling the panic room with water, Peter admits his extreme dislike of The Godfather, something shocking that the rest of the family argues with him about, considering all the talented cast in that movie and its following sequels.

Meanwhile, Meg is sent down through a vent to get food. But Peter talks to her through a loudspeaker and the robbers find and capture her although they mistake her for a boy. She hopes that they will rape her, saying that she won’t scream or struggle, but, horrified, they decline her advances. As the water is reaching its peak, Joe shows up and opens the door. All the water drains out of the room, saving their lives. Joe also mentions that he caught the crooks. The crooks press charges of sexual harassment against Meg, and she is taken down to the police station by Joe. Even though he keeps telling the family that Meg needs a lawyer to fight the charges, they strangely ignore him. In the end, Peter thinks that she is just going to a dance and tells her to enjoy herself, assuring Lois she'll be fine.