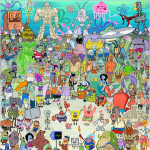 Hi, welcome to Family Guy Wiki! Thanks for your edit to the Peter's Progress/Goofs page.

I don't want them listed in the earlier episodes until the Halloween episode confirms their names and the persons attached to them...there is a site that has unofficial information but I am not accepting that until the episode airs and the characters are positively identified. --Buckimion 21:02, October 28, 2010 (UTC)

If it is the OFFICIAL episode guide I'll accept it but you must write the page and positively identify the character if you are creating a link. However, if she is NAMED in an episode differently, the episode guide is considered wrong. --Buckimion 00:36, November 4, 2010 (UTC)

I designed her on a youtube app called "Go Animate." I created the character, and when I was finished, I started to take snapshots of her in different poses. Mik-ette(Talk♥Edit) 20:05 April 18th, 2011.

Can you better describe the scene where his foot disappears? I went through the Superbowl fight footage frame-by-frame and his feet do not disappear. I don't want to pull it out yet though until I make sure of the scene you are trying to describe. --Buckimion 22:41, November 16, 2011 (UTC)

What ever you are trying to post is being obscured by some funky programming. We can't read it and it will be reversed. --Buckimion (talk) 21:35, December 9, 2013 (UTC)

Leave past discussions alone. Those matters are considered closed and additions are not required. --Buckimion (talk) 02:56, November 3, 2014 (UTC)

Retrieved from "https://familyguy.fandom.com/wiki/User_talk:Iknowfishfolk?oldid=170701"
Community content is available under CC-BY-SA unless otherwise noted.