Hi, welcome to Family Guy Wiki. Thanks for your edit to the Diane Simmons page. Please take a moment and review the Family Guy Wiki: Editing Policy which contains most of the important ground rules for edits.

I know you meant well, but due to really stupid edits, we had to severely cut back on information presented in games and books as unofficial and edits are limited to the television broadcasts. You may want to brush up on the Family Guy Wiki: Editing Policy. --Buckimion (talk) 02:31, February 10, 2013 (UTC)

Quit listing characters as Jewish unless they specifically mention practicing the Jewish faith or admit being of Hebrew descent. We have a clan of Amish here in Ohio named Cohen who are so far removed from any Jewish heritage as to be rendered null. At your rate, everyone could be considered Jewish if you were to proscribe to the bible story of Adan & Eve. --Buckimion (talk) 12:39, March 4, 2013 (UTC)

References have no place on the main page and in this case, a call back to a previous episode isn't a reference either, but at best a note. I question right now whether using Peter's "Italian" is even noteworthy unless they make a point of noting the callback. I'm just not going to fight people all summer over it. --Buckimion (talk) 23:41, May 23, 2013 (UTC)

Who exactly is claiming a different actor for Connie's voice? If it is something like IMDB or Wikipedia then Family Guy isn't responsible for stupid fan edits. If it is claimed in a DVD commentary, we should research it or simply make a note that they got it wrong, although I would think we have it wrong in this case. --Buckimion (talk) 22:28, June 1, 2013 (UTC)

Connie doesn't appear in "Caviar Eater," period. Every site besides this one credits her as appearing in it and Fabruzia Balk as voicing her. JohnnyLurg (talk) 10:34, June 2, 2013 (UTC)

While I grudgingly gave you your edit on Captain Crunch as the page was for the character and not the cereal*, your edit to Toucan Sam engages in speculation and won't fly, despite being likely. There has to be concrete proof by way of a statement in a commentary or tweet.

Tell that to Roald Dahl's official website (and IMDb and Wikipedia, but you've already thoroughly expressed your denial of those two sites). --JohnnyLurg (talk) 00:13, May 6, 2014 (UTC) 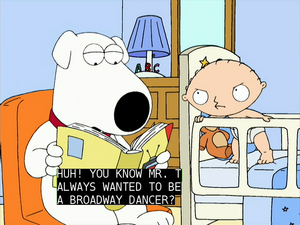 The "official" captioning in "Fore Father" is correct. Your information may either be from an unofficial source, or flat-out misinformation which I've found to happen often in similar cases. --Buckimion (talk) 13:16, October 26, 2014 (UTC)

My information is taken from my personal experience watching Adult Swim airings multiple times. I'll post a screencap next time the episode is available for streaming on adultswim.com to prove it. --JohnnyLurg (talk) 19:11, October 27, 2014 (UTC)

The jury MAY be out on Jack LaLanne being Jewish, but reports HAVE been documented[1] that until proven false, WILL result in the edit staying. --Buckimion (talk) 00:06, May 19, 2015 (UTC)

Even our own pages WON'T be accepted as proof most of the time since no one fucking bothered to source it. However, every other goddamn site is either using us or IMDB as a source so it is next to impossible to trace. --Buckimion (talk) 19:43, May 27, 2015 (UTC)