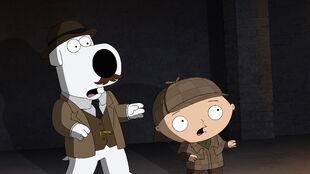 V is for Mystery
Brian and Stewie set out to solve a mystery. 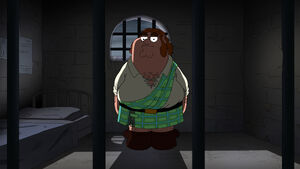 After Sherlock Holmes solves a case in which the crown jewels are taken by Professor Moriarty, Holmes faces retirement and Dr. Watson announces his impending marriage. But when a prostitute is murdered in the style of the notorious Scottish blackguard "Brute," who killed prostitutes with the name that started with "V" and replaced their intestines with bagpipes. But when they visit him in prison where they find he couldn't have done any of the murders of which he was accused of as he has two right hands and the killer used his left. Setting up a decoy, they find the killer is none other than Dr. Watson's fiancee, Constance. 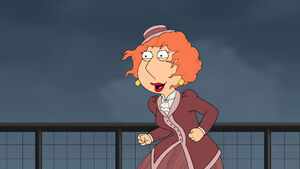 Pursuing her to Paris, they corner her at the top of the Eiffel Tower where she slips over the side after catching her shoe of a steel plate. Before falling to her death, she teases them by hinting that it is a case that even Sherlock Holmes couldn't solve and 'he'd be victorious.' Realizing that they've been misled, they return to London to prevent the murder of Queen Victoria by Professor Moriarty, who created the Brute and whose henchman Sherlock had caught with the crown jewels earlier, thinking it was the professor himself. The reasoning behind killing Queen Victoria and framing Sherlock for freeing the Brute is that she "prostituted" herself by sharing control of Guyana with the Dutch royals.

Previous Episode /// V is for Mystery \\\ Next Episode

Retrieved from "https://familyguy.fandom.com/wiki/V_is_for_Mystery?oldid=212661"
Community content is available under CC-BY-SA unless otherwise noted.