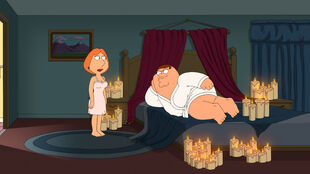 A night for love

Valentine's Day in Quahog
Stewie gathers scores of Brian’s former girlfriends to get to the bottom of why he’s unsuccessful in love. 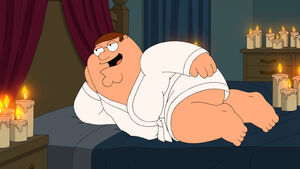 Following a special Valentine's opening, Lois talks Peter into spending the day in bed. As Peter tries to make things romantic, Lois finds that spending the day together isn't as neat as she planned. Peter gets a call from a former girlfriend who tries to separate Peter from Lois. 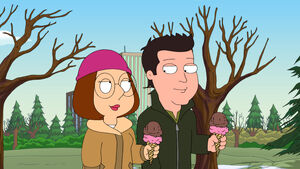 Meg heads out for a date with a guy from the internet who claims she is prettier than her picture. On their date, Meg finds things they have in common but gets knocked out and awakes in a motel room to find her date stole her kidney. Despite her missing kidney, she holds her date to a promise of a full day together. True to his word, they have a full day's date. After their day out, he gives Meg back her kidney and they kiss. 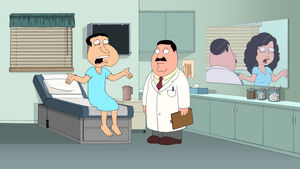 Following a one-night's stand, Quagmire's date curses him that he'll one day get what he deserves. Following a shock on his date's tampon warmer, he suddenly appears as a woman to everyone else, fooling even Joe who hits on her. When he goes to the doctor, Dr. Hartman wants to give him a pelvic exam. Escaping, Quagmire realizes he has really been cursed and decides to make the best of things by being a lesbian. 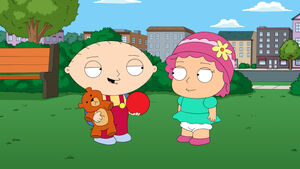 Consuela sneaks over the border to be with her husband and Chris goes to collect the paper money from Herbert but Herbert's grand-niece falls for him. She goes to Chris and with Herbert's coaching gets a date.

Deciding to find out what love was like in the 60s, Stewie falls for a girl on a time travel trip and follows her. Opening up, he kisses her only to find out that it is really Lois. After throwing up, he returns to the present where Brian makes things worse. 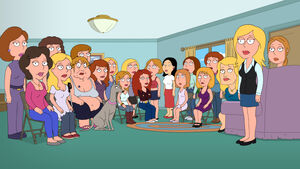 Meanwhile, after Brian is feeling depressed about never having luck with his past loves, Stewie decides to help Brian get to the bottom of his lack of success with women and invites all of Brian's former girlfriends over to discuss what went wrong with their relationships. Brian gets angry and lashes out at the criticism and starts to dish out criticism of his own. He finally turns on Stewie as well who sends the women after Brian and chase him through the streets as they pass the Kool-Aid Man and his parents waiting for his date, a bottle of Yoohoo chocolate drink.

Mayor West finds that Carol is spending time with another Mayor and vows to win her back, engaging in a battle until he wins. Although Mayor McCheese also shows up and hints at having a fling with Carol.

At the end of the day, Peter and Lois make passionate love as Peter imagines he's cheating at his wedding to Lois with her cousin's hot date, Mayor West prepares to cut the ribbon for the dedication of a naked Carol, Chris and Sandy share popsicles as Herbert stares, Consuela greets her family after she returns, Stewie throws up as Lois kisses him goodnight, Meg stores her kidney in her room as a reminder of her best date ever and Brian lies naked with a smile with every single one of his past loves.

Retrieved from "https://familyguy.fandom.com/wiki/Valentine%27s_Day_in_Quahog?oldid=220817"
Community content is available under CC-BY-SA unless otherwise noted.