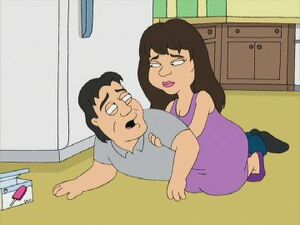 Valerie Anne Bertinelli (born April 23, 1960) is an American actress, best known for her role as Ann Romano's daughter, Barbara Cooper Royer, on the television series One Day at a Time. After One Day at a Time, Bertinelli continued to act in several made for TV movies and mini-series. Bertinelli married Eddie Van Halen on April 11, 1981. They have a son named Wolfgang "Wolfie" William Van Halen, together. On December 5, 2005, she filed for divorce, which was finalized more than two years later. She now stars in the TV Land sitcom Hot in Cleveland along with Betty White, Wendie Malick, and Jane Leeves.

Brian Griffin watches One Day at a Time in "The Son Also Draws'.

She appeared in the episode "Ready, Willing, and Disabled" playing Bonnie Swanson in the movie Rolling Courage: The Joe Swanson Story.

She also starred in a Lifetime movie Men Are Terrible And Will Hurt You Because This Is Lifetime in "Movin' Out (Brian's Song)".

Retrieved from "https://familyguy.fandom.com/wiki/Valerie_Bertinelli?oldid=209220"
Community content is available under CC-BY-SA unless otherwise noted.