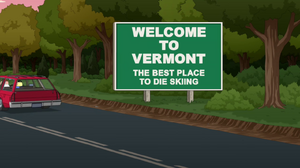 Vermont is a state in the New England region of the northeastern United States. In 2009 the Vermont became the first state to legislate same-sex marriage.

In "Fresh Heir", Peter asks Chris to marry him so that he can still have access to the Pewterschmidt family fortune after Carter makes him his sole heir. They head to Vermont for the ceremony where Chris gets annoyed with him checking out another boy's butt while registering gifts at Kitchenware Unlimited. At Trattoria, Peter makes the arrangements for the morning-after reception. And at Johnny's Dance Studio, Chris and Peter practice their dance for the wedding.

Retrieved from "https://familyguy.fandom.com/wiki/Vermont?oldid=160925"
Community content is available under CC-BY-SA unless otherwise noted.