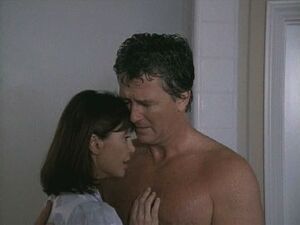 Victoria Principal (born January 3, 1950) is an American actress, best known for her role as Pamela Barnes Ewing on the CBS nighttime drama Dallas from 1978 to 1987.

In Da Boom, Principal and costar Patrick Duffy, as Bobby Ewing, shot a live action spoof of the infamous Dallas morning scene, in which Pamela Ewing wakes up, realizing that the past season or, in Family Guy's case, the past episode, was a dream. Ewing consoles her and asks what Family Guy was.

Retrieved from "https://familyguy.fandom.com/wiki/Victoria_Principal?oldid=170689"
Community content is available under CC-BY-SA unless otherwise noted.