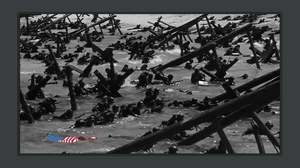 Waldo, or Wally outside of North America, is a character in a series of books titled Where's Waldo?, featuring detailed double-page spread illustrations depicting dozens or more people doing a variety of amusing things at a given location. Readers are challenged to find a character named Wally hidden in the group. Waldo's distinctive red-and-white-striped shirt, bobble hat, and glasses make him slightly easier to recognize, but many illustrations contain "red herrings" involving deceptive use of red-and-white striped objects.

In "Saving Private Brian", part of Brian's army graduation consists of finds Waldo while on an obstacle course.

The Griffins watch a History Channel documentary Where in World War II is Waldo? in "Total Recall" with Waldo floating face-down in the water during the D-Day invasion of Normandy.

In order to test Carter's vision in "The Finer Strings", Dr. Hartman has him find Waldo, and is upset because he couldn't find him himself after two days.

When Brian has to face Quagmire over dating Ida in "Bri-Da", he notes that he's not the first to deliver tough news, leading to a cutaway gag that hints that Waldo may have committed suicide.

Retrieved from "https://familyguy.fandom.com/wiki/Waldo?oldid=215350"
Community content is available under CC-BY-SA unless otherwise noted.