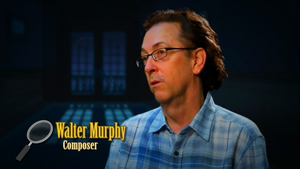 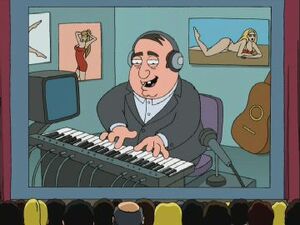 Walter Murphy (born December 19, 1952) is a pianist, composer, and arranger who had a massive hit with the instrumental, "A Fifth of Beethoven," a disco adaption of Beethoven's Fifth Symphony, in 1976, when disco was at the height of its popularity. He is one of the two main composers of Family Guy, the other being Ron Jones.

Murphy was born in 1952, in New York City, New York, and grew up in Manhattan. He attended the Manhattan School of Music there, where he studied jazz and classical piano. After finishing school, Murphy served as an arranger for Doc Severinsen and the Tonight Show Band, before becoming a jingle writer.

In the early 1970s, Murphy became interested in adapting classical music into disco songs and coming out with hits, after seeing two songs of different genres based on composer Johann Sebastian Bach's music, "Joy" by Apollo 100, and "A Lover's Concerto" by the Toys, become popular. To try to attain this feat, Murphy made a demo tape with disco adaptions of several classical and neo-classical works in it, and mailed it to every record label in New York City. The response was unimpressive, and only a rendition of Ludwig Beethoven's "Symphony No. 5 In 'C' Minor" generated any interest amongst the various labels. This interest led to the owner of Private Stock Records, Larry Uttal, giving Murphy the chance to record the rendition, which was creatively dubbed "A Fifth Of Beethoven."

Even though Murphy played nearly every instrument on the instrumental his record company cautioned that the record would stand a better chance if it was credited to a group rather than an individual. To Walter's annoyance, they came up with the name Walter Murphy and The Big Apple Band, only to discover two days after its release that there was already a Big Apple Band. The name on the label was changed to The Walter Murphy Band and then simply to Walter Murphy.

The song when released entered the Hot 100 at number 80 on May 29, 1976, and took 19 weeks to reach number 1, where it stayed for one week. Early in 1977, it was licensed to RSO Records for inclusion on the soundtrack to the movie, Saturday Night Fever. The second single from the album, "Flight '76," based on Nikolai Rimsky-Korsakov's "Flight of the Bumblebee," didn't fare as well however, only reaching 44 on the Hot 100.

His next release was a 12" single, "Rhapsody in Blue," which featured "A Fifth Of Beethoven" on the b-side that sold somewhat well, possibly due to the b-side. A second 12" single of "Gentle Explosion," failed to make the club or radio charts in 1978. A move to RCA in 1979 produced one more 12" single, "Mostly Mozart," which proved that Murphy had taken this concept as far as it could go. His last chart entry was in 1982 with a medley of "Themes From E.T. (The Extra-Terrestrial)" which climbed to number 47 on the Hot 100.

Since then, Murphy has gone back to jingle writing, and has written music for numerous TV shows, including Family Guy and its offshoot album, Family Guy: Live in Vegas. The song "You've Got a Lot to See", composed for the Family Guy episode FG317 "Brian Wallows and Peter's Swallows", won the award for Outstanding Music and Lyrics at the 2002 Emmy Awards.

He appears as himself in "Brian Does Hollywood" at the Woodies for Best Soundtrack.

His own hit, "A Fifth of Beethoven", is used to accompany a scene where Peter, Quagmire, Joe and Cleveland do a roller disco routine in "Hell Comes to Quahog".

One of the subtle but distinguishing differences between Jones and Murphy's music is that Murphy often employs the show's theme song, which he composed himself, in the cues.

Retrieved from "https://familyguy.fandom.com/wiki/Walter_Murphy?oldid=232706"
Community content is available under CC-BY-SA unless otherwise noted.