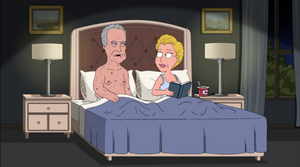 Henry Warren Beatty (né Beaty; born March 30, 1937) is an American actor and filmmaker, known for his work in Heaven Can Wait, Reds, Bonnie and Clyde, Shampoo and Dick Tracy.

When Brian admits to being easily distracted in "Short Cuts", Stewie notes out that it isn't always a flaw, pointing out that it saved Warren Beatty's marriage to Annette Bening. In a cutaway gag, Warren arrives in bed ready for sex, but Annette distracts him with a pudding cup and a video of Blue Bloods.

Retrieved from "https://familyguy.fandom.com/wiki/Warren_Beatty?oldid=219216"
Community content is available under CC-BY-SA unless otherwise noted.