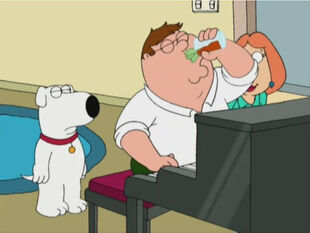 Peter playing the piano while intoxicated

Wasted Talent
Lois finds that, when Peter is drunk, he is a virtuoso at the piano so she enters him in a piano competition. 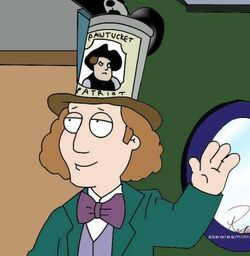 Lois desperately searches for one piano student who can beat her rival Alexis' student at the piano competition.

Meanwhile, Peter drinks even more Pawtucket Patriot Ale than usual in an attempt to win a tour of the brewery. Almost ready to give up, he drinks one more beer, which turns out to have the silver scroll. Peter and Brian go on the brewery tour, but split off from the group to try beer that never goes flat despite Pawtucket Pat’s warning that they haven’t worked out the kinks. When Pat finds Peter and Brian in the forbidden room, he ejects them from the brewery. 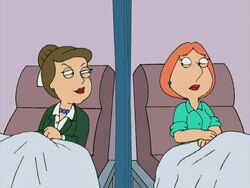 Angry at Pawtucket Pat, Peter tries to get Lois’ attention by playing the piano showing that he can play piano perfectly when drunk. Lois decides to enter Peter as her student in the piano competition and keeps him in a state of constant inebriation. At the competition, Peter can’t even find the piano, Lois has to turn him around and move him a couple of inches. Peter and Lois win first place but Lois frets that she may have harmed his health for her own selfish need to win.

Retrieved from "https://familyguy.fandom.com/wiki/Wasted_Talent?oldid=218878"
Community content is available under CC-BY-SA unless otherwise noted.