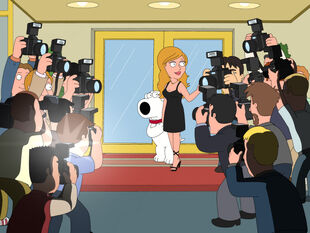 Lauren Conrad might be the love of Brian’s life

We Love You, Conrad
Lauren Conrad might be the love of Brian’s life. 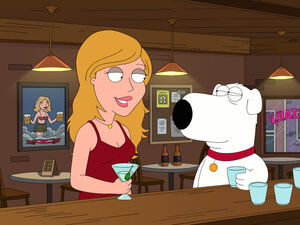 Brian learns that his ex-girlfriend Jillian is getting married, and he is not invited to her wedding. That, however, does not stop him from meeting her fiancé Derek, who turns out to be the perfect man in every aspect. While drowning his sorrows at a bar, he meets and hooks up with Lauren Conrad, the star of The Hills. Stewie learns of their relationship and leaks the news onto the Internet, and soon the media begins raving about it. 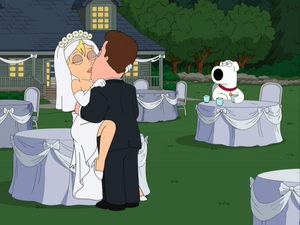 Unable to handle being depicted in the media with who he determines to be a famous dumb blonde, Brian attempts to break up with Lauren, only to discover she is one of the most intelligent people he has ever known—well-educated, articulate, and quite accomplished—even more so than he is, a fact which displeases him and causes him to compare himself to Jillian. Lauren determines that Brian is still in love with Jillian, and decides to help him convey his still-thriving feelings for her. On the day of Jillian's wedding, Brian passionately professes his love to her, but she lets him down gently. Jillian and Derek are married, and Brian, now left with no one, miserably states he can't even go back to Lauren because he gave her worms.

Previous Episode /// We Love You, Conrad \\\ Next Episode

Retrieved from "https://familyguy.fandom.com/wiki/We_Love_You,_Conrad?oldid=216330"
Community content is available under CC-BY-SA unless otherwise noted.