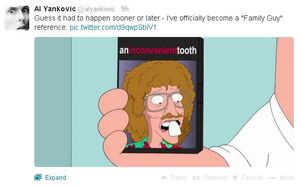 The main premise of "PTV" is similar to the premise of the 1980's Weird Al Yankovic film UHF.

When Peter leaves Stewie in the park and he is returned by another woman in "The Most Interesting Man in the World", Peter tries to gloss over the situation by proposing they watch a fictional documentary about Weird Al titled An Inconvenient Tooth. However, Lois refuses to be distracted and tells Peter he is an idiot.

Retrieved from "https://familyguy.fandom.com/wiki/Weird_Al_Yankovic?oldid=180026"
Community content is available under CC-BY-SA unless otherwise noted.