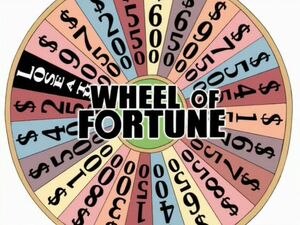 Wheel of Fortune is an American television game show created by Merv Griffin. Three contestants, occasionally three pairs of contestants, compete against each other to solve a word puzzle, similar to those seen in the game hangman. The name of the show comes from the large wheel that determines the dollar amounts and prizes won or lost by the contestants.

Peter was one of the contestants on the show in "I Take Thee Quagmire", calling Sajak "Regis". The winning puzzle was "Alex Kerras in Webster". The shopping element shown in the episode, which led to Joan's employment, was eliminated from syndicated version in 1987 and from the network version in 1989. Since that time, players receive their game winnings in cash.

A British parody of Wheel is shown in "Family Guy Viewer Mail No. 2" with Wheel of Politeness, the contestants vying to let the others proceed first and then all apologizing to the audience.

When Brian selects Quagmire to be his "sucker" to buy a bad condo in "Brian the Closer", a model arrives and turns his teeth in the style of Wheel of Fortune.

Brian watches Wheel of Fortune alone in his new apartment at the end of "The D in Apartment 23".

Retrieved from "https://familyguy.fandom.com/wiki/Wheel_of_Fortune?oldid=204528"
Community content is available under CC-BY-SA unless otherwise noted.